The battle against online gambling by Sheldon Adelson and his Coalition Against Internet Gambling is going into the next stage. A few weeks ago his bill amendment leaked on the Internet. Now some propaganda videos have been released, claiming Internet gambling could lead to terrorist attacks in size of 9/11 attacks. This does not only sound a bit absurd, the video's sources of this information are not mentioned, and how this could even be possible is also not explained. The video uses faux-elements of news reporting, such as highlighting 'official-looking prints of letters or reports', and is exaggerating facts greatly. But see for yourself, you can find the video below.

In another video the Coalition targets the fear of children who gamble. In this, a son obtains his fathers login details for a gambling website, plays on his phone, and even uses his dad's credit card to pay for the games. Games, such as Angry birds, and Candy Crush Saga are portrayed as gateway drugs. As well as in the other video, this video also does not give information of how the boy even learned the complicated rules of poker, or even the fact that his father didn't protect his login information, let alone his credit card.

Gambling is a risk for minors, no debate, but a gambling website will not allow minors to play there in general. It is very unlikely that the scene from this video becomes reality for every child in the United States if online gambling is allowed. Condemning regular phone video games as gateway drugs is also a bit far fetched, simply because video games have been around for decades now, and there are no scientific studies claiming that people who play video games are compulsive gamblers. You can watch the video below and make your own opinion. 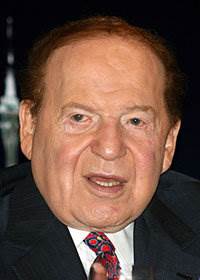 Who is Sheldon Adelson?

Sheldon Adelson is the chairman and CEO of Las Vegas Sands Corp, one of the world's biggest operators of gambling establishments. The group runs The Venetian Resort Hotel Casino and the Sands Hotel and Casino in Las Vegas, another large casino in Bethlehem, Pennsylvania, the Sands in Macao, and the Marina Bay Sands in Singapore.

Since online gambling is being legalised in the US, he has been rallying against it, claiming it is not in his own interest, but in that of the people. He is also a big financial supporter of the Republican party, and mentioned that he will spare no expenses in his rally against online gambling.

Is online gambling really that unsafe? Our opinion.

Online gambling has been around for a long time now. Maybe not in the USA, but even though there are currently three states that have allowed regulated online gambling, it will not mean, that they USA can't handle this in the same way all the other countries do in which online gambling is allowed and regulated. Of course, it's easy to say that gambling will allow terrorists to withdraw money from the United States, but how is this information backed up? In reality, there are plenty of security measures that protect the casino and the player, and measures that protect from money laundering, like for example collusion detection, or betting pattern recognition, just to name a few.