Video Poker is a popular online casino game that often has its own category, but otherwise falls into the categories of table games or poker games. It's an online poker game, which isn't played against other players but the computer, and you also won't have the option to raise bets or bluff. Basically, you'll need to form a poker hand from 5 cards that you're being dealt, and you need to make a decision that affects your chances of winning.

What makes this game interesting is that you can play with a strategy that lowers the house edge and gives you a higher chance for a win. Although there is no definitive strategy to win every round (if there was, casinos would be broke), you can maximise your chances by choosing the right video poker game and applying the best strategy to play it.

*Bonus Terms apply and they can change any time.

How to play Video Poker

There are different variants of the game, but they all follow a basic set of rules. The player gets dealt an initial card hand of 5 cards, and can choose which cards to keep. After the decision has been made, the cards that the player doesn't want to keep are removed and replacement cards are dealt from the stack. Some games automatically select the best cards to hold, and others don't, but holding suggested cards might not always be the best decision, it depends on how much risk you're willing to take in the game.

The game is usually played with a single deck of 52 cards, and the deck is shuffled each new round. You'll need to form poker hands to win a payout, and the less probable a certain card combination is, the higher the payout will be. Different variants of the game exists, and they have different probabilities and payouts. 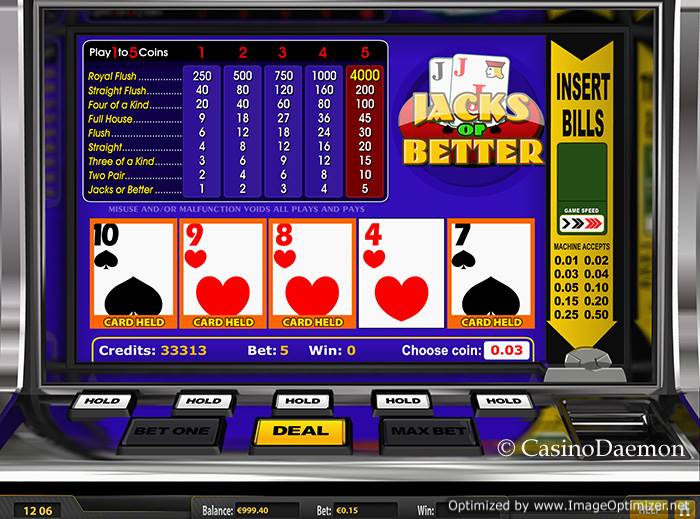 To play the game, simply chose the coin value and how many coins you wish to play. When looking at the paytable of a game, you'll notice the highest payouts can often be achieved when you bet the highest number of coins, but remember that achieving such a card hand is difficult.

There are dozens of varieties of Video Poker, that follow a basic set of rules for the game, but have small rule variations. Many casino game developers also have their own versions of the same game, but it's important to compare them and choose a game that you like. For example, a game variant can offer a higher overall payout, but you'll also need a higher card hand value to get a minimum payout.

One of the most commonly found variants is Jacks or Better. The lowest payout of 1:1 is achieved with a card hand of a pair of at least two Jacks. There are also variations with 10s or Better.

Deuces Wild is another popular variant. The payout table often starts for a Three of a Kind combination, or other higher payout, but in turn you get the card 2 (Deuce) as a wildcard, which can stand in for other cards, and often also pays out a special win when you get all four 2s.

There are many other variants, including Joker Poker, Joker Wild, All Aces, All American, Aces & Faces, and many more. Take a look around and try video poker for free before playing real money. 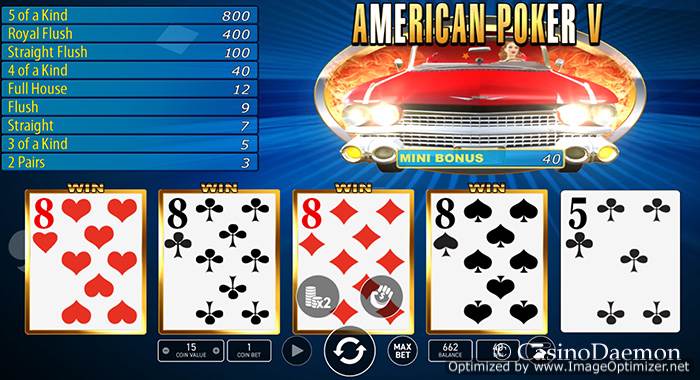 Some games give players the chance to Double Up their win in a game of chance with a 50:50 chance. This is optional, meaning you don't have to play the gamble. But if you feel that luck is on your side you can gamble and potentially double your win.

Some games have an interesting option allowing you to play more than one card hand at the same time, sometimes up to 100 hands. Now, what makes this interesting is that the first cards you get dealt initially are the same, and so are the cards that you can hold, but when you click on the second deal the cards will be randomly taken from the card deck, and each of the card hands has its own deck. This means that there are different outcomes for each hand dealt.

Keep in mind that when you play multiple hands at a time, the bet will be multiplied accordingly for each hand, which makes it a lot more expensive to play multiple hands at a time. If you're lucky and get a good initial hand dealt, it can be really worth your while, but if you don't then it can turn out a lot more expensive. Keep an eye on your bankroll! 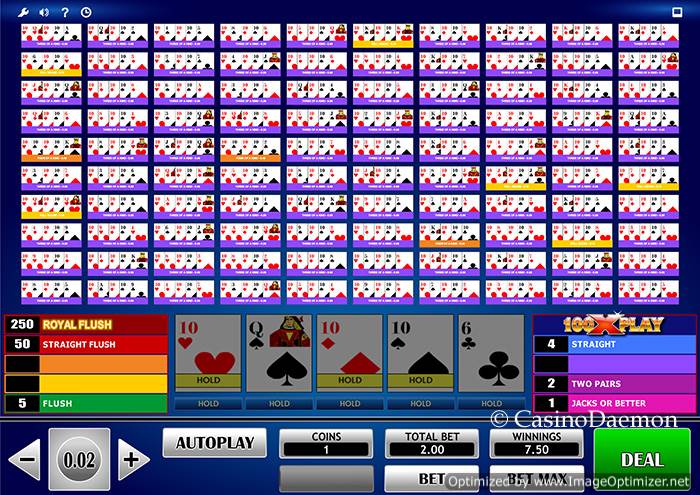 When you play Video Poker, it's important that you check the rules of the game first before starting to play. We also recommend playing Video Poker in practice mode first, and although it is still a game of chance, you can still apply a basic strategy that can help you to lower the house edge. Making yourself familiar with the rules is important if you want to get the best chance to beat the house at video poker.

The strategies vary with the version played, but when played right you can lower the house edge significantly and raise your chances of winning the games. 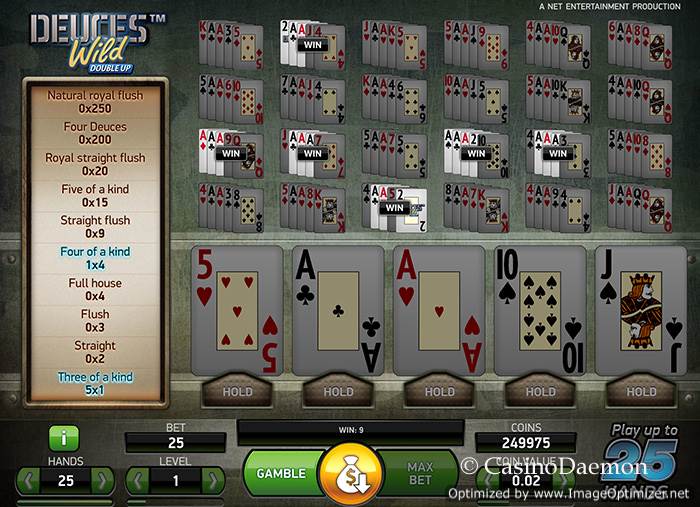 Take a look at the paytable

Every variant has a different paytable, and some pay more generously than others, depending on the type of game and the probabilities of winning hands. For beginners, we recommend playing a simple game like Jacks or Better or 10s or Better.

In many cases you can win the highest possible jackpot when you play the maximum number of coins, and the jackpot is often considerably higher than when you don't play with the maximum number of coins. While this is tempting, keep in mind to not gamble for money you cannot afford to loose. The probability of winning that jackpot is still very low. For example, betting three coins at a time can result in you losing your money quickly if you don't land that big win you're hoping for. So, the more you bet, the higher the risk. If you want to try to go for the jackpot, make sure that you know the variant you're playing well enough to know the risk.

There is no definite strategy of how you can play video poker and win every time. However, there are strategies that you can apply to lower the house edge of the casino. These will vary with the video poker variant you're playing, but they will include which cards you should hold to have statistically the best chance to win the hand.

Video Poker variants usually differ in the minimum necessary hand needed to win, and possible special wild cards. For example, Jacks or Better video poker pays for a minimum hand of two jacks, while Deuces Wild has the 2 as a wildcard, and the payout usually started at a higher-valued hand, such as two pair or three of a kind.

The types can also differ in their payout rates, as the house edge will be different. Some games have a higher house edge and higher risk, but in turn may pay out a higher potential jackpot, or even a progressive jackpot.

Video Poker is an easy combination of online poker with a slot mechanic. You'll get an initial hand of five cards dealt and you can make a decision which cards to hold. Hold the cards you think may have the best potential to form a winning hand. In the second and final round you'll get cards replaced which you didn't hold, and you'll find out if you've won.

There are different variations of video poker, some with slightly different rules, or even games where you can play more than one hand at a time.