Average rating of 4.8 from 5 votes 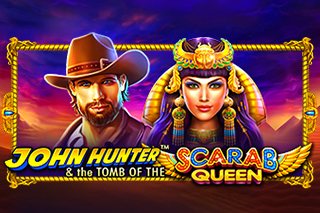 John Hunter and the Tomb of the Scarab Queen is the third instalment in the Pragmatic Play slots series starring a brave and handsome adventurer who travels the world in search of lost relics.

This time, the expedition takes you to ancient Egypt, where you'll explore the tomb of the queen of scarabs, in whose chamber great riches of up to 10,500x the total bet are hidden.

You can read the full review below to get a better idea of the game mechanics and find out what we think of it.

The list below contains some of the best online casinos to play John Hunter and the Tomb of the Scarab Queen for free or for real money.

All of these sites are licensed, have a good reputation among players, pay out winnings promptly, and offer bonuses with attractive terms.

John Hunter and the Tomb of the Scarab Queen is played on the standard 5-reel, 3-row grid.

It has 25 fixed paylines and three or more matching symbols must land on adjacent reels from left to right to win.

You can play the slot on a wide variety of devices and with a minimum bet of €0.25, which is ideal for players with a small budget.

A lively soundtrack complements the Egyptian theme of the game, with a background showing the Sahara desert, with the pyramids of Giza flanking the reels.

Among the eight standard symbols are four lower value ones – represented by playing cards from Jack to Ace – and the premium ones, which include a leather briefcase, a revolver, the deity Anubis and John Hunter himself. The latter is the most lucrative, and if you land five on a payline, it yields a win of 32x the total bet.

The queen-pharaoh is the wild symbol who appears on all reels except the first one. She also substitutes for all other symbols except scatter, Money and Collect.

The volatility of this Pragmatic Play slot is medium. Regular combinations occur regularly, frequent enough that you don't lose interest. However, it can take a long time to land a really high win.

The Return to Player (RTP) of John Hunter and the Tomb of the Scarab Queen is 96.50%, which is slightly above average.

One of the slot's main features is the Money Collect. The beetle is the money symbol, which can land on reels 1-4.

On each spin, this symbol is assigned a random cash value from a predefined setting. If one or more appear on the grid along with any of the five Collect symbols on the 5th reel, one of the following bonuses will apply:

Things heat up when three pyramid scatter symbols land on reels 2, 3 and 4 simultaneously, as this triggers the free spins round.

As soon as the spins are over, a large scarab appears covering the first four reels and a final spin is awarded. If a Collect symbol lands on the fifth reel, the full bonus amount is awarded.

Keep in mind that the jackpot can be subject to multipliers of up to 25x, which can result in wins of more than 10,000 times the stake.

Additionally, if another three scatters are landed in this round, you will be awarded eight additional spins, with no limit to the number of retriggers possible.

I'm not a big fan of this game's ugly Money symbols, but the are interesting and exciting regardless.

Being a medium variance slot, it is possible to get some great wins, although they will never be high enough to make you a millionaire.

Overall, John Hunter and the Tomb of the Scarab Queen is a fun game with great winning potential, great gameplay, and an attractive design. And while the slot can be a bit volatile at times, it's not quite as risky as some of the other games of the series,  such as John Hunter and the Book of Tut or Da Vinci's Treasure.

John Hunter and the Tomb of the Scarab Queen FAQ

You can play John Hunter and the Tomb of the Scarab Queen for real money at many trusted online casinos, the best of which are mentioned in this article.

Pay attention to money symbols that have cash prizes! If a Collect symbol lands on reel five, you will be awarded the full value of these symbols.

With this feature it is also possible to win extra prizes, get a multiplier of up to 25x on all wins, expand the money symbols onto the whole reel to win more prizes, or trigger re-spins.

Yes, John Hunter and the Tomb of the Scarab Queen slot has a responsive web design and is optimized for mobile devices such as iOS and Android smartphones and tablets.

John Hunter and the Tomb of the Scarab Queen

John Hunter and the Book of Tut