Average rating of 4.8 from 4 votes

Wolf Gold is one of the most popular online slots from Pragmatic Play. It offers exciting game-play with many interesting features, including stacked wild symbols, blazing reels feature, money re-spins and three jackpots.

The animal-themed slots takes players into the western parts of the United States, and you can see what looks like the iconic mountain-range of the Monument Valley in the Navajo Tribal Park in Arizona and Utah. 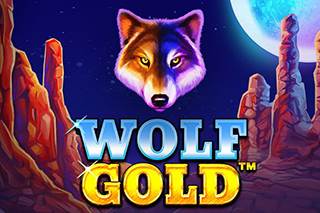 Wild animals are roaming through the night, and while you can enjoy symbols showing a buffalo, horse, a bald eagle and a cougar, the wolf is the one that you really want to see on the screen, as it will howl to the full moon, and hopefully lead to a big win.

The Wolf Gold slot has five reels, three rows and 25 fixed pay-lines that you can play with a bet starting from €0.25 all the way up to €125.

Wolf Gold has a theoretical return to player of 96%, and with a medium volatility, the slot is a suitable game for all types of players.

We've selected some of the best online casinos with Wolf Gold online slot to their players, and you can play Wolf Gold for real money either on desktop or mobile.

The scatter symbol shows the iconic mountain range of Monument Valley drenched in sunset light. It can appear on reels one, three and five, and if you manage to land three symbols you will trigger five free spins.

The specialty of the free spins is that the reels two, three and four will show the same symbol is one giant symbol block of 3x3. This can potentially lead to higher winnings, if you also get the same symbol on reels one and five, but it's by no means a guarantee for a larger win.

The moon symbol is a special money symbol. It can appear on every reel and show a value of either an amount from the Mini or Major jackpots, or it can show another amount.

If you manage to land six moon symbols on the screen, the Money Re-spin feature will start. In this, all regular symbols will be removed (after wins have been paid), and the reels will only show moon symbols and empty spaces.

You'll get three re-spins, during which all additional appearing moon symbols will be held on the screen, and if that happens, the re-spin counter will be reset to 3. Once the counter reaches zero, or all spaces are filled with moon symbols, the feature ends.

At the end of the feature, you will get the combined value of all moon symbols, and if you're really lucky and fill the screen completely with 15 moon symbols, you also land the Mega jackpot with the value shown on top of the screen.

The highest jackpot of the game has a value of 25000 coins, and the highest symbol win is 500 coins. The amount of your bet will therefore influence how much the Mini, Major and Mega jackpot can potentially pay out, and a higher bet size will mean a higher jackpot.

Triggering the free spins doesn't usually take very long, as they triggered frequently when we tested the game. However, the amounts we won were often on the lower end. Every now and then, with a bit of luck we managed to get a high-paying symbol in the middle, which led to a higher paying combination.

Triggering the jackpot game takes a lot longer though, and when we tested the game for a few hundred rounds, we didn't manage to trigger it even once. However, who is to say that you won't be the lucky one triggering it?!?

We've chosen some trusted online casinos where you can play Wolf Gold for real money. You can find these recommendations in our Wolf Gold review, and learn more about the casinos and what they have to offer.

The jackpot game of Wolf Gold is triggered with six moon symbols. The jackpot re-spins start, and with each re-spin you get the chance to land more moon symbols on the screen. Filling the screen completely with moon symbols will award the Mega jackpot.

The Pragmatic Play online slot Wolf Gold has an RTP (theoretical return to player) of 96% and a medium volatility which leads to a more balanced game with more frequent but less high wins.

Legend of the Golden Monkey